Honorable Marsha Slough, time to start paying attention to what is happening to families and children in your San Bernardino County Courthouses!

THIS IS A TEXT OF MY FORMAL COMPLAINT AGAINST COMMISSIONER DANIEL.

Our case is concerning the Child Custody Case of our now 15 year old daughter, Megan. It is a classic case of Parental Alienation and egregious acts of custody time interference.

This case came before Commissioner Deborah Daniel, who displays continued misconduct and incompetence in her courtroom, as well as a condescending tone and disrespect towards litigants in her courtroom, especially Hispanic males. Our trial began on July 11, 2013 but was postponed due to the Petitioner’s attorney going on maternity leave. Our case continues on October 10, 2013.

It is my understanding that the length of judicial complaints should be kept to a minimum amount of words, however, Commissioner Daniel’s transgressions are numerous. Listed are just some of my concerns:

2.     On August 7, 2012, in an Ex Parte hearing Commissioner Daniel correctly ruled that the Petitioner’s Ex Parte filed was not cause for an emergency ruling and instead issued a hearing date. The Petitioner stated in her Ex Parte declaration, “I understand I must abide by the court order” and again orally in the courtroom, “I just don’t want to go against the court order.”  To her credit and in regards to custodial time, the petitioner had not yet violated our custody order from January 2012.

However, during our Ex Parte hearing, Commissioner Daniel in apparent lapse of good judgment offered these ill-chosen words:

"I can tell you that in my experience no law enforcement officer is going to force a teenager to engage in a visit."

This statement changed everything and has been parroted, repeatedly, by the Petitioner and her husband at nearly every one of my attempts to pick up our daughter during my court ordered custody times.

Aside from the fact that my experiences have proven Commissioner Daniel’s assertions wrong --I have since had the Sheriff Department assist in enforcing the court order on a couple of occasions up until my rights were suspended--the fact that Commissioner Daniel would inadvertently inform a party that there is a potential way around her own court order, re-placing an adolescent in the rich role of decision maker, is at best poor judgment and displays a lack of insight bordering on incompetence.

Commissioner Daniel’s speculation based on her personal experiences as to whether or not orders ought to be followed or to what extent law enforcement may effectively enforced court orders has directly caused distress to all parties involved, and, most unfortunately to our daughter, Megan.

3.     Commissioner Daniel informs me that court judges only read up to the first 5 pages, emphasizing the point by adding, “That’s it. That’s the maximum.” The California Rules of Court state that declarations may be up to 10 pages in length and should therefore be read in their entirety.

“...one thing often that many courts do is they quite reading after 5 pages. That’s’ it. That’s the maximum.”


4.     On June 13, and again initially, on July 11, the dates of the pre-trial hearing and the first day of the trial respectively, Commissioner Daniel denied my request to offer into evidence a DVD of audio and video evidence that is crucial to my case. Commissioner Daniel lied about having the means with which to play my video and audio evidence. She stated:

“And there won't be any playing of DVD's.   We don't have any access to play.”

“There are Court rules that limit electronic recordings which include requiring a transcript of anything in it by a certified Court Reporter.”

Commissioner Daniel had incorrectly interpreted the California Rules of Court. I respectfully asked permission to speak on the matter.

THE RESPONDENT: Okay.  May I speak on that, Your Honor?

THE RESPONDENT: I do have transcripts in there, but my understanding was that they did not need to be done by a certified Court Reporter.

THE COURT: I suggest that you check the Government Code and the Rules of Court.

I have grown familiar with the Rules of Court. It clearly states that I may transcribe my own audio recordings.  California Rules of Court: Rule 2.1040. (Section b-1)

I went through a similar exchange at the beginning of our trial on July 11, 2013. It was more of an admonishment for bringing the issue up again during a conversation I had with the clerk when she phoned me.

I asked again, at the beginning of our trial, if I could speak on the matter to which Commissioner Daniel responded with a resounding, no.

I did build up the courage to bring up the matter again, quickly informing Commissioner Daniel that I had made copies of the section of the Rules of Court. Commissioner Daniel asked to see the copy and later acknowledge that I would be permitted to play my evidence.

5.     Commissioner Daniel has “temporarily” denied my rights as a father pointing to the uncorroborated allegations of sexually inappropriate behaviors that never took place and misinterpreting findings in Dr. Amy Miller’s non-confidential 3190 psychologist report. The false allegations were determined to be unfounded by CPS and again, a careful and complete reading of the psychologist report shows a clearer picture of what is happening. Perhaps Commissioner Daniel should read past the first 5 pages and more thoroughly.

“It is improper for a grown man to be in the same bathroom at the same time that a child is taking a shower, a 14 year old girl. It doesn’t matter that you can’t see anything. It is a clear privacy violation.”


Again, this incident never took place and the accusations were determined unfounded by CPS and simply a custody issue.

In regards to Commissioner Daniel’s statement:

On January 14, 2013 the petitioner failed to make our daughter available for appointments with Dr. Beth McGuire as ordered on November 29, 2012. When I addressed this in the courtroom, and pointed to the Petitioner’s pattern of not cooperating with the court rulings, Commissioner Daniel, defended the petitioner stating:

“It's just been the holidays, okay? So a lot of times people have difficulty at a holidays.”

My interpretations of court orders are that they are to be abided by regardless of the season.

7.     Commissioner Daniel discouraged me from pursuing my right to file contempt charges when the Petitioner repeatedly failed to abide by our custody order stating that they are “incredibly difficult to successfully prosecute,” “puts pretty much a halt to everything else,” and that all of the “contempt violations are matters that are subject to one dismissal rule” stressing the point that if they are dismissed, that’s it, “it’s gone forever.” She reiterated to a desperate father, that “nothing else will happen on the custody and visitation matter.” Shortly thereafter, when I chose to move forward so that I may be allowed to see our daughter soon, Commissioner Daniel “reminded” me that re-filing any of the contempt violations “could end up causing you to be designated as a vexatious litigant”.

There have been several more custody violations, one which includes a hit and run, however I fear filing, even though it is my right to do so, because of my concerns of being labeled as vexatious litigant and therefor being one step closer to having my parental rights permanently removed.

All I want is our daughter back and my God-given right to be in her life.

The actions of Commissioner Deborah A. Daniel of the San Bernardino Family Court has caused me and my family enormous amount of grief, distress, and has contributed to the psychological and emotional damage of our 15 year old daughter.

Had Commissioner Daniel acted professionally by; reading all of the declarations, not presumed me guilty of unsubstantiated claims, diligently worked to make sure that our daughter maintained continued contact with both of her parents; our daughter would not be in the emotional state that she is now. Having both parents is always in the best interest of a child.

What my family, including three elementary school-aged daughters, are experiencing is a nightmare; what our 15 year old daughter is going through is an atrocity. It is nothing short of a train wreck of which Commissioner Daniel is the conductor.

What is happening in Commissioner Daniel’s courtroom is a classic case of parental alienation and it is child abuse.

Please feel free to contact me if you have any questions. 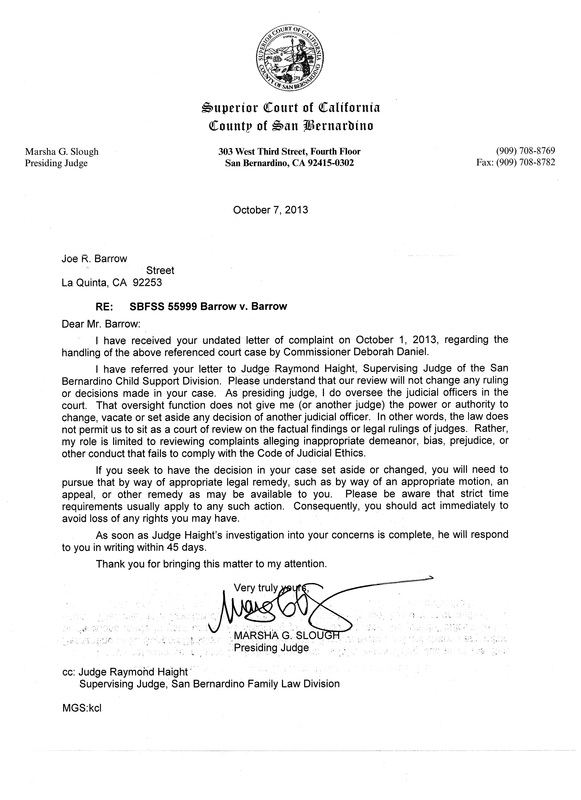 This is the response that I received from Presiding Judge Haight 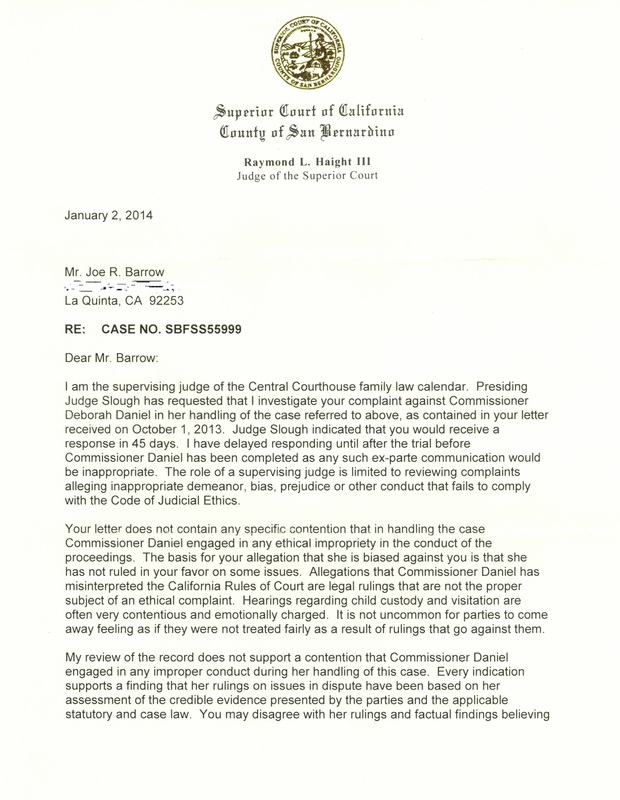 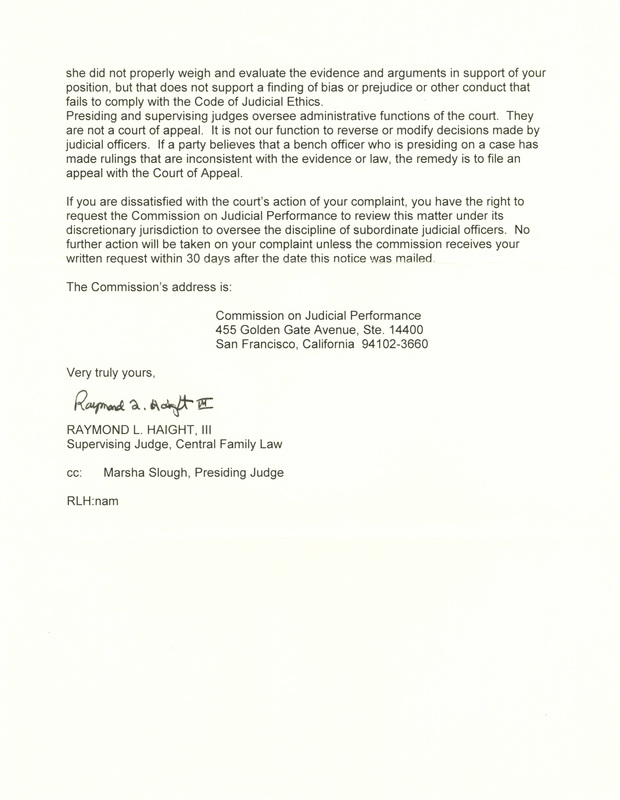