"The damage that is done to the innocent heart, mind, and soul of a child is so reprehensible that this behavior by the alienated parent should be grounds for termination of the alienating parents custody rights until they seek and commit to professional counseling by a mental health professional who is experienced with these dynamics. It is child abuse at its worst because it teaches a loving child to go against their own innate desire and natural instinct to love the targeted parent."
Joe R. Barrow, MFTt, Founder April25.org 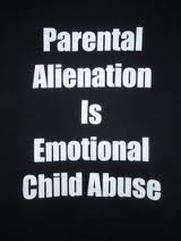 Parental Alienation (PA):
A form of emotional child abuse where a custodial parent belittles or vilifies the other parent to the child. With the intention of destroying the loving relationship between the other parent and their child. It is done with words and behaviors from a disturbed, vindictive parent who may have unresolved childhood issues. In PA, the alienating has little to do with the child and stems more from an embittered ex-spouse.
Or, in the words of Dr. Richard Warshak, the author of DIVORCE POISON, "...a deliberate and concerted campaign by one parent to turn children against the other parent by bad mouthing, bashing and brainwashing, in an effort to alienate them and sever their relationship."Parental alienation is a parent behaving in a way that's intended to turn a child away from the other parent.

Targeted Parent (TP):
The parent whom the alienating parent is trying to remove from their child's life by systematically destroying their loving relationship. He/she is the target of many assaults from verbal to false allegations of emotional, physical, and sexual abuse.

Alienating Parent (AP):
The alienating parents is usually the disturbed parent who consciously and sub consciously attempts to alienate their child from the other parent. There are three levels of alienating behavior, mild, moderate and severe. This parent acts out of completely disregard of the best interest of their own children.

Alienated/Aligned Child: The alienated child is the real victim.  They are children who are alienated from a parent after separation and divorce, who express their rejection of that parent stridently and without apparent guilt or ambivalence, and who strongly resist or completely refuse any contact with that rejected parent. For the most part, these rejected parents fall within the broad range of “marginal” to “good enough,” and sometimes “better” parents, who have no history of physical or emotional abuse of the child.


In severe cases of parent alienation, the child is utterly brain- washed against the alienated parent. The alienator can truthfully say that the child doesn't want to spend any time with this parent, even though he or she has told him that he has to, it is a court order, etc. The alienator typically responds, "There isn't anything that I can do about it. I'm not telling him that he can't see you."
Definitions of Parental Alienation Syndrome (PAS):
By Gardner

1. The Parental Alienation Syndrome (PAS) is a disorder that arises primarily in the context of child-custody disputes.

2. Its primary manifestation is the child's campaign of denigration against a parent, a campaign that has no justification.

3. It results from the combination of a programming (brainwashing) of a parent's indoctrinations and the child's own contributions to the vilification of the targeted parent.

My (Darnell's) definition of Parental Alienation is different from Dr. Gardner's original definition of PAS in 1987: "a disturbance in which children are preoccupied with deprecation and criticism of a parent-denigration that is unjustified and/or exaggerated." I am placing the emphasis on the brainwashing process while Dr. Gardner's definition goes a step further to explain that the term is similar in meaning to brainwashing except that he adds the additional component of the child becoming active participant in the denigrating the targeted parent. In effect, the child has been successfully brainwashed.

With either definition, the motivation for the alienating parent has both a conscious as well as "a subconscious or unconscious" component.

From:
New Definition of Parental Alienation
What is the Difference Between Parental Alienation (PA) and Parental Alienation Syndrome (PAS)? Copyright 1997 by Douglas Darnall, Ph.D.
Parental alienation is the creation of a singular relationship between a child and one parent, to the exclusion of the other parent. The fully alienated child is a child who does not wish to have any contact whatsoever with one parent and who expresses only negative feelings for that parent and only positive feelings for the other parent. This child has lost the range of feelings for both parents that is normal for any child.     ~Family Wars: The Alienation of Children.  Peggie Ward, Ph.D. and J. Campbell Harvey, Esquire
~http://www.breakthroughparenting.com/PAS.htm